These are the most common benign tumors of infancy. They affect girls five times more often than boys and occur in light skinned people more often than those of darker complexion. They occur on the face or head and neck area in over 80% of cases. Most are not present at birth and become apparent within the first month of life. The current thought is that hemangiomas develop from cells that cross from the placenta into the baby and become lodged and grow.

Hemangiomas that are flat and involve the upper levels of the skin are called superficial. Those that are deep in the skin and appear as a lump are called deep. When a hemangioma has both a deep and a superficial component it is called compound. The terms cavernous hemangioma, strawberry hemangioma, stork-bite, angel kiss, and other historical terms should all be dropped. They don’t describe the birthmark in a way that is meaningful.

Once they appear they proliferate, or grow, for up to 18 months. Most don’t grow past 6-8 months. Then they begin a slow process of regression or involution. This period of involution is quite variable, lasting over ten years in some patients. The degree to which the birthmark involutes is also variable. Most doctors give the advice that the birthmark will “go away” if you “leave it alone” for a long enough period of time. This is what has been taught for decades and is no longer held to be universally accurate. Yes, all hemangiomas regress to some degree but the majority, however, do not involute to a cosmetically acceptable level. In general, more than half of patients with a facial vascular lesion who wait more than 5 years will end up having some surgical or laser intervention because the result is not acceptable.

Our philosophy is, “If we can get a result now that is at least as good as if we waited 5 years then why not do it now?” The time can be used for touch up procedures, scar maturation, etc. A very important element to take into account is the child’s developmental stage. Children develop a sense of self around 2 to 3 years of age. Around that time they develop the ability to compare their bodies to others. They start to notice that mommy does not have the red thing on her nose or that little brother’s cheek looks different. Of course, other 3 year olds without birthmarks are learning the same. By age 5 most children are close to starting school where the social pressures of appearance and body differences become more acute. So, in keeping with our early intervention philosophy, we try to get as much done as is reasonable by age 3 and certainly by age 5 to try to avoid the psycho-social effects.

In some cases, hemangiomas can be life threatening or functionally impairing by interfering with vision, breathing, hearing or eating. Very large hemangiomas can cause problems by trapping cells that aid in blood clotting (Kassabach-Merritt phenomenon). Internal hemangiomas involving the abdominal organs can be very problematic as well. When a child has multiple external lesions and/or very large ones a search for internal hemangiomas should be done. There is no exact number but, in general, if there are more than 6-7 external ones, consideration should be given to looking for internal ones. Airway hemangiomas most typically are found just below the vocal cords. They can be life-threatening and present with noisy breathing. Aggressive treatment with propranolol, various lasers and/or steroids is indicated.

Propranolol has replaced steroids as the first line medical treatment for infantile hemangiomas. It is a beta-receptor blocker – its effects in general are to decrease heart reate, decrease blood pressure, relieve anxiety and various other uses. However, for infantile hemangiomas it has been found to decrease the rate of profliferation and increase the rate of involution. The doses at which propranolol is used for hemangiomas is much lower than for other conditions – therefore the side effects are extremely rare. Propranolol is also available as Hemangeol (made by Pierre-Fabre Pharmaceuticals). It is the only FDA approved version of propranolol for the treatment of infants with infantile hemangioma. It is formulated specifically for this use.

These powerful medicines have been replaced by propranolol as the mainstay of medical therapy. They are still used for life-threatening lesions and those that do not respond to propranolol. 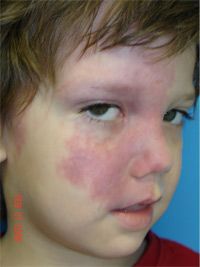 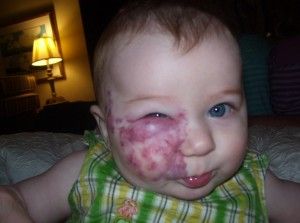 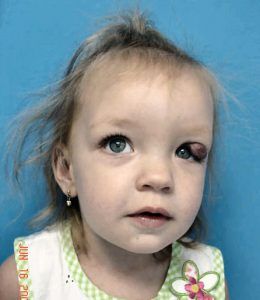 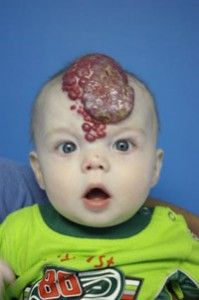 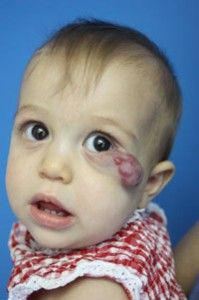