Vascular Malformations include a wide variety of lesions which are very different from hemangiomas. They are true developmental abnormalities of the vessels involved so they are always present at birth, even though they may not be apparent until later.

Port Wine Stains (PWS) are a common type of malformation. They are technically a venular (small veins) malformation but the term port wine stain is so ingrained in our language, and the birthmark is not easily confused, that it is acceptable to keep this term.

They are quite common, occurring in about 0.3% of the population with an equal distribution among males and females. Like all malformations, they are present at birth and get worse, to some degree, over time. They can be pale pink to dark purple in color and their cause is thought to be related to a problem in the nerve regulation of the vessels‚ though this is not proven.

Capillary Malformations are flat, pink-red birthmarks that are most common on the face and neck. Most commonly these are the lesions associated with Sturge-Weber syndrome. These malformations should not be confused with the very common staining seen in newborns on the forehead, nape of neck and eyelids. These very predictably fade in the first year while capillary malformations do not.

Venous malformations can be deep, superficial, diffuse or localized. They commonly appear as bluish, spongy masses that can be compressed easily. When the child is lying down or crying, the lesion fills up with blood and the mass becomes fuller. Occasionally, hard lumps can be felt in the malformation, these are calcified nodules.

The most common areas affected are the cheek, floor of mouth and extremities. Pain and swelling are common complaints. Klippel-Trenaunay Syndrome (KTS) is a venous-lymphatic malformation of the extremities, most commonly of the legs. Venous malformations can get worse during puberty and pregnancy or as a result of infection and trauma.

Lymphatic malformations are most commonly found in the neck, cheek or mouth or in association with venous malformations in KTS. In the neck, they are often called‚ cystic hygroma‚ but this term should be discontinued. These lesions are made up of expanded lymphatic channels which can be quite large and typically get bigger due to infection, such as a cold, and then go back to their regular size once the infection goes away.

There are two major types of lymphatic malformations‚ macrocystic and microcystic. Macrocystic lesions have large (macro) pockets and microcystic have very small lesions that invade the tissues. It is important to tell these apart for treatment.

Arterio-venous malformations are typically found in the brain; the second most common site is the head/neck most commonly in the mid-face. They are often pulsatile and firm and, like other malformations, always present at birth. 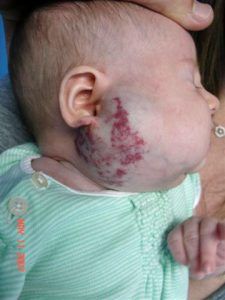 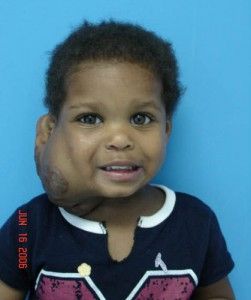 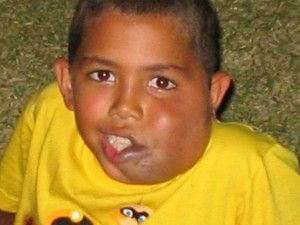 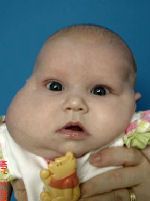 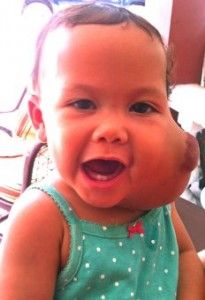